THE ROMA ISSUE IS A DEMOCRATIC ISSUE-

Dear Academics, Professors, Ladies and Gentlemen, recently as an academician, Prof. Dr spoke with His Excellency Maharaja Kutai Mulawarman Prof. Dr. Hc. M.S.P.A Iansyahrechza. FW. Ph.D., director of the IEP-INSTITUTO EDUCANDO PARA A PAZ and a publicist who talks about himself with his heart, knowledge and experience about the past and the present, about peace, tolerance and human rights.

Living in a time of “betrayal of intellectuals”, in a time of lies, violence and deception, in a time of irrevocable collapse of the transcendental world and Nadil nihilism, His Highness Maharadja Kutai Mulawarman Prof. Dr. Hc. M.S.P.A Iansyahrechza. FW. Ph.D. has managed to exist intact, preserving its autonomous principled position and authentic thought experience, resisting the challenges of both blind actionism and life speculation, and being equally successful in avoiding both false avant-garde and stubborn traditionalism. In such a thought experience, he examined the current socio-political, intellectual and cultural reality from the standpoint and in strict categories of philosophy, historical, legal theory and practice. In the horizon of his reflection are the phenomena and questions of the destiny of the intellectual, the perspectives of philosophy, history and literature in the modern world, freedom, democracy and peace. 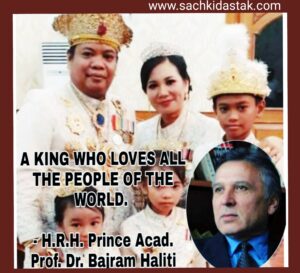 For me, for example, His Highness Maharadja Kutai Mulawarman Prof. Dr. Hc. M.S.P.A Iansyahrechza. FW. Ph.D is not only a great king and intellectual but also a great writer of history: I understood this best by listening to him as he told me how he wrote his works, especially historical ones for which he received great praise, how he collected and used documents for that a history book. He never started working until he had a very clear and, above all, completely accurate idea of the time he would describe, of the people who lived then.

So, as a king, a research scientist, doctor of science and publicist, he answered numerous challenges that are behind us, and above all, he successfully animated all the problems that human civilization faces in solving political, economic, social and national problems.

He advocated that the economic and financial crisis in the world be resolved through dialogue and democracy. It also advocates for a better life for all citizens and for the inequality, insecurity and poverty to be erased forever, and for all the benefits of multiethnicity and multiculturalism to be preserved in the world.

His Majesty Maharadja Kutai Mulawarman Prof. Dr. Hc. M.S.P.A Iansyahrechza. FW. Ph.D is a tireless pilgrim, not to worship idols, but to invent general human ideals that unite humanity. Nothing human is alien to him. He believes that in order for people to understand each other, they must first know each other – get to know each other deeply. That is why he travels a lot from East to West, from North to South with a basic mission: to bring people together in order to avoid intolerance, in order to achieve “unity in diversity”.

In all these countries, he gave a series of lectures entitled “Peace, Tolerance and Human Rights”. For him, all humanity is one Being that each of us deeply feels as unity.

His Majesty Maharadja Kutai Mulawarman Prof. Dr. Hc. M.S.P.A Iansyahrechza. FW. Ph.D, as one of the most prominent intellectuals, as a great fighter for the development of civil society, points to the education and acquaintance of young people in particular, with basic civic concepts, affirmation of political tolerance, a man who opposes all repression, fights against all forms of undemocratic consciousness, affects the development and nurturing of cooperation between national cultures, mutual rapprochement and understanding of creators from different countries and peoples, also affects the protection of the right to public and free speech, the right to unhindered development of language and literature of every nation around the planet, protection of multinational, multiconfessional and the aesthetically diverse cultural treasury inherited by all citizens of the world.

His Majesty Maharadja Kutai Mulawarman Prof. Dr. Hc. M.S.P.A Iansyahrechza. FW. Ph.D, when it comes to Roma, emphasized that the Roma issue is a democratic issue. There is no human right that is in conflict with the vital interests of the Roma people as a whole.
The Roma issue is the liberation and affirmation of national identity. The Roma issue is a civilization issue. It is perhaps the most important on European soil today for the development of human and natural resources and raising the quality of life, Carry out a modern reform of schooling and overall education. Create a unique educational program for the entire Roma people with the aim of its spiritual integration, but with full respect for historical, civilizational and regional peculiarities.

In the search for the meaning of our existence, it is really necessary to see man in history, man’s destiny in the national destiny, in the collective of the individual, that behind national and social ideologies that moved people to great events, we see those very personal motives in “creating history”. “, To see a man’s face behind flags, cannons and patriotic rhetoric, to hear his heart, to sense his soul – concluded His Highness Maharadja Kutai Mulawarman Prof. Dr. Hc. M.S.P.A Iansyahrechza. FW. Ph.D.