At the beginning of the conversation, I must say that peace is the most basic human right in this life. If the most basic rights are taken from him, what is the use of life? Fear is the closest and quickest way to death. The risk of infection with the 19th Covid known as the emerging corona virus is the least compared to the role Ordinary influenza, but as I mentioned that fear is the closest and quickest way to death, so the one who transmitted this disease, which was intended by specific countries as a unique attempt, and as a fierce warfare is much stronger than the accepted wars, then this time we may notice All of us that the war we are dealing with is a purely chemical war of the highest order There is a war with the deadly weapons that we all know, despite the expansion of the international scope that enabled certain countries to possess nuclear weapons that threaten to move the world in a moment and turn it upside down, so I say with confidence that there will be no war with heavy or deadly weapons that we know It is a purely chemical cold war that would topple the world in the sea of ​​counterfeit conspiracy, and made with human will that possesses real power and real sovereignty that enables it to transmit any of the things in the heart of societies ,, which managed to penetrate all the barriers placed within that deep state ,, That war, which we are seeing now in a different form Visible to the eye, but despite not being seen is more dangerous than all the weapons that we have reached so far, it has undoubtedly been able to bring down countries and systems that were inconsistent with the policies followed by that deep state, the biggest misfortune is that we Arabs have nothing to do with that game, However, we are forced to receive its painful blow with a wide chest. 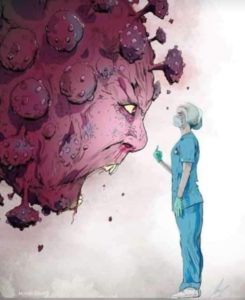 The economic wars are the ugliest and most dangerous at all. Specifically, if they are between India, China and America, it is difficult to penetrate the American defense system in order to be able to know what toxins they contain inside it. Overthrow the world in a few cold hours, the war c As for the time, which is the fiercest and most violent of all to bring down the fundamentals of states from human lives, dynamic minds and economics, without distinction, we cannot describe their ugliness. Although China and an individual managed to control this fabricated epidemic, the world is still horrendously threatened, Not all countries were China, with its supernatural mindsets. Now, after the world witnesses a conflict with the invisible enemy that comes this time in a form that is not visible to the eye and cannot be felt, it needs to activate the public role to enable Arab minds in particular. To recognize this most dangerous enemy of all time, few days China will come out to announce its recovery from that epidemic, and also announce its return with mighty power in order to restore its consideration and revenge for its dignity and itself. ,, While we may find Russia extending its hand to help in order to put an end to the wound that has afflicted the Italian people ,, finally I say that the role that Arab governments play from imposing a general curfew does not violate human freedom at all but rather it is activated to preserve lives in general ,,, So I hope that we contribute to maintaining security We, our safety, and the safety of our homelands, are a short period in which we have to abide so that we can cross that stage. Finally, I say to all those around the world, keep your children understanding real national wealth and their priceless minds. Which despite its diversity, but ultimately its purpose is the just peace of all humanity. You should cultivate a culture of peace and tolerance in the minds of young people.Artery in which we live by ,, Teach them how to love their countries and how to respect the beliefs of others of freedom of expression and thought ,, belief and worship