We would like to draw everyone’s kind attention towards that occurred on 14th September, 2020 at Bottola more, Sreerampore.

Yesterday on the date 14th September, 2020 activists of International Human Rights Organization, West Bengal Chapter along with contractual laborers of BSNL, who are facing injustice done by the BSNL authority as BSNL has not paid their salary for 16 months and has also introduced many new clause in the job which is not acceptable were protesting against the injustice done to them.

The police personnels had hit two of the laborers with ‘laathi’ which resulted in injuries. Mr. Sumanta Nandi (S.I of Sreerampore P.S) verbally abused and physically harassed the General Secretary of International Human Rights Organization, Mr. Soumya Shankar Bose and the Joint Secretary of International Human Rights Organization, Miss. Tiyasha Biswas along with the other activists of IHRO and the laborers of BSNL. As we know the a male officer cannot touch any lady but Mr. Sumanta Nandi ( S.I of Sreerampore P.S) being a male officer pushed Miss. Tiyasha Biswas (Joint Secretary, IHRO, West Bengal Chapter). This was a very sad incidence and violation of law and human rights by the police. 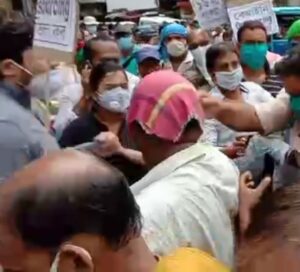 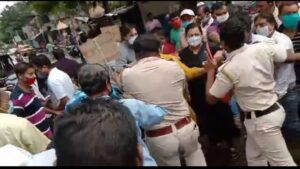 Without any lady police , the male policemen pushed the lady activist and also used abusive languages and threatened to arrest and lathi charge…

The contractual laborers of BSNL has not received their salaries for the past 16 months. AThey are also facing many other injustices done by the BSNL authority. 11 laborers have already committed suicide. Amidst this pandemic the BSNL authority has not helped these laborers in any manner.

We request everyone to protest against Mr. Sumanta Nandi (S.I of Sreerampore P.S) and his team for their inhuman behavior .