Your Excellency, Ladies and Gentlemen, Distinguished Academics, Brothers and Sisters, 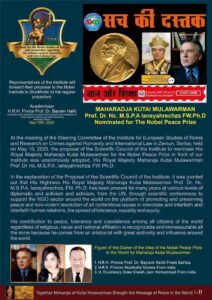 In his daily permanent contacts with various statesmen, representatives of the diplomatic corps, politicians, representatives of the non-governmental sector, the King always spoke about his mission: peace among all people, financial and economic empowerment of all people, preservation of peace and tolerance and common coexistence between people, the fight against racism, discrimination and xenophobia, the fight against hate speech, the fight for equality and equality of all people regardless of racial, religious and national affiliation. Respect and implementation of the United Nations Universal Declaration of Human Rights, respect for and implementation of the Framework Convention for the Protection of National Minorities, respect for and implementation of the Convention on Regional and National Minorities, respect for the Convention on the Prevention and Punishment of the Crime of Genocide, etc.

I hope that the Nobel Committee will keep in mind the transparency of your actions and the mission of peace as the salvation of human civilization on this planet and decide that you, Your Excellency Prof. Dr. Hc. M.S.P.A. Lansyahrechza FW. Ph.D this year you will be the winner of the NOBEL PEACE PRIZE: