Every January 27, Serbia and the world mark the International Holocaust Remembrance Day, but also the 75th anniversary of the liberation of the Auschwitz death camp. World Holocaust Remembrance Day was established on November 1, 2005 by a resolution of the UN General Assembly. Considering it necessary to reaffirm human rights, prevent and punish the crime of genocide, but also as a warning of the ever-present danger of racial, national and religious hatred based on prejudice, to support education, remembrance and research of the Holocaust at national and international level, through broad information the public on the Holocaust, freedom of access and research of archives and the inclusion of this issue in national educational programs. 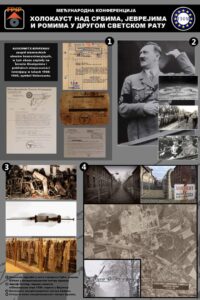 The Law on the Protection of German Blood carried out mass genocide against Serbs, Jews and Roma. First in Germany, and then in all European countries under the occupation of the German Reich. Gas chambers, not so distant processes, decrees, provisions, persecutions, expulsions, executions without evidence, crimes for prevention and self-protection, prisons, ghettos, forbidden zones, Auschwitz gas chambers and experimental scalpels of doctors from Auschwitz, Dachau and Buchenwald, Jasenovac and others torture took the lives of 6,500,000 Jews, 700,000 Serbs and 3,500,000 Roma. In a word, the Roma passed through Dante’s hell from Vitos through Iasi to Auschwitz and Jasenovac.

Hitler set out the goals of Nazism on February 24, 1920, in a 25-point program, five of which show the roots of future criminal and genocidal acts, namely:

• We demand the unification of all Germans into a greater Germany, based on the right of peoples to self-determination;

• We demand equality for the German people in relation to other peoples, the annulment of the Versailles and Saint-Germain peace treaties;

• We demand land and territory to feed our people and to colonize the surplus of our population;

• We demand the abolition of the mercenary army and the formation of a national army. This program was elaborated by Hitler in detail in his book “Mein Kapmf”, published in 1925, explaining Nazi views and goals, which is why this is considered an authentic source of Nazi doctrine.

From his program and book, and then the policy of the Reich Chancellor of January 30, 1933, it is clear that he planned and prepared the ground for waging a war of aggression against a number of other states, prepared a crime against peace and genocide against the Jewish, Slavic and the Roma people.

And in Pavelic’s Independent State of Croatia (NDH), which was proclaimed on April 10, 1941 under the auspices of Nazi Germany and fascist Italy, and included Croatia, Bosnia and Herzegovina and the Srem region – an area inhabited by about 6.3 million people, from more than a third of whom were Serbs, and the complete liquidation of Serbs, Jews and Roma was sought.

In atrocities and sadism towards Serbs, Jews and Roma, the Ustashas almost surpassed their Nazi-fascist masters. It is one of the largest execution sites for Serbs, Jews and Roma, and not only in the former SFRY. Ustice and Gradina are places of fear and horror. There, the Ustashas mercilessly slaughtered with knives, and killed innocent Serbs, Jews and Roma with shovels, axes and mallets. Roma women were brutally tortured there, and Roma, Serbian and Jewish children were buried alive. Men, women and children were slaughtered with knives, axes, axes, killed with hammers, shot and grilled, burned in crematoria, cooked alive in cauldrons and made into soap, hung and satirized by hunger, thirst and cold. 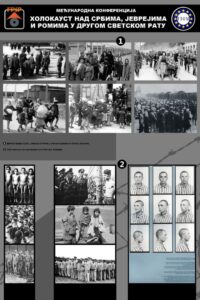 The crime of genocide against children are crimes for which there is no repentance. In the entire occupation area of Europe, only in the Ustasha Independent State of Croatia, there were children’s concentration camps. During the Second World War, over fifty thousand children, including the unborn and the newborn, were killed, slaughtered and massacred in the Independent State of Croatia, over ten thousand in the Ustasha camp Jasenovac alone. The world does not know the truth about the crimes of genocide against Serbian, Jewish and Roma children.

The genocide of the Roma has often been challenged. It was usually claimed that the Roma were an antisocial problem – which is very incorrect – because in the third point of Mein Kampf it is stated that from the racial aspect, in addition to the Slavic and Jewish people, the Roma should also be exterminated.

Seventy-five years have passed since the end of World War II, and there are still debates about whether the Roma were victims of the Holocaust. There are almost no works in the world that deal with this topic. The authors, for the most part, only incidentally mention the crimes committed against Roma, Serbs and Jews. That is exactly the reason and the main goal of my address, “The Holocaust against Serbs, Jews and Roma in the hell of Jasenovac.” 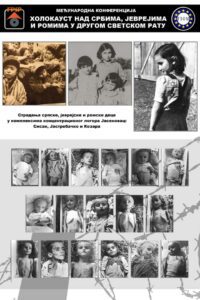 The genocide against Serbs, Jews and Roma was not only erased from world history, but until recently it was also erased from national history. In our textbooks, this phenomenon is simply omitted, there is no place for it even in the footnotes. However, it should be said that the lack of scientifically based discussions on genocide in the former Yugoslavia is a much more complex problem than it might seem at first glance. Scientists remained silent in the face of the delicacy of the situation they faced in a skilfully staged revolutionary time.

The Roma experienced Genocide in the Second World War, as did the Jews and Serbs, but to this day a part of the world’s scientific and intellectual public disputes that. This is due to the fact that the Genocide against the Roma was not in the focus of the legal processes that were conducted after the capitulation of Germany and its war allies, and the disappearance of the so-called NDH and so on, precisely because of the undefined constitutional and legal status of the Roma and the sociological degradation to which they have been exposed throughout history.

Based on established facts, eyewitnesses, witnesses, historical and legal documents, during the Second World War, the crime of genocide against Orthodox Serbs, Jews and Roma of all faiths except Islamic was committed.

The objectively approximate number of victims of genocide has not been determined, which is a crime, an injustice towards innocent victims.

The perpetrators were not called to account, justice was not served, thus leaving the possibility of renewing the crime of genocide, which was contrary to the International Convention on the Prevention and Punishment of the Crime of Genocide.

The victims of the genocide were not compensated. No one has calculated how many fewer Serbs, Jews and Roma there are today as a result of the crime of genocide. Of the approximately 75,400 Jews who lived in Yugoslavia on the eve of World War II, only about 16,000 survived. Of the 10,500 Jews who took refuge in Sarajevo at the beginning of the war, about 9,000 were taken to Ustasha camps, from where about forty returned. Almost all Jews in Zagreb were killed, property was looted. Ustasha leaders Budak and Artuković boasted in 1942 in the Ustasha NDH Parliament that they had solved the “Jewish question” most radically. After emigrating to Israel, it is estimated that about six thousand Jews live in the former Yugoslavia today.

Jasenovac, eternal warning. You need to write about it, talk about it, make movies. Not to intimidate people, but not to forget Nazism and to warn of the danger that threatens the world from the growing neo-Nazism. All those who want to rehabilitate the time of Nazism today should be brought to that museum, those who claim that there was no camp or extermination, those who in 1978 in some countries run a bookstore called “Rudolf Hess” with Nazi literature and flag, those who tolerate neo-Nazi organizations and their provocative practices in the West. Of course, also those who made it possible for thousands of Nazi criminals to live and develop their criminal activity in the world today. 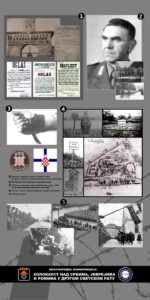 Fascism and Nazism have done too much harm to humanity to be easily and quickly forgotten. Those evils must not be forgotten! Remembering them, as the darkest part of the new human history, is in the interest of all peoples and societies of the world. This is in the interest of the people and those countries on whose soil fascism arose as an ideology and as a form of government. Not because they would carry a mortgage and a complex of guilt, which, after all, cannot be attributed to the work of contemporaries of fascism, let alone future generations, but because they would fight in solidarity with other nations for the complete eradication of old and every new fascism and neo-Nazism as a common enemy. This is all the more so because the ideology of fascism and Nazism is not only far from being suppressed from the consciousness of individuals, groups and entire strata, as their ideological and political orientation, but it has long found its life in organizing and activities of its old and new supporters.

According to some estimates, the genocide against the Roma took about three and a half million victims in Europe. Historians forget those three and a half million Roma who disappeared in the smoke of a crematorium or bonfire built by the Nazis. However, that is a fact: in most of the works that deal with the world of concentration camps: not a single word, not even a phrase. Silence. Forget it. Gypsies. Unknown.

I hope that this author’s text will make a significant contribution to the spread of knowledge and teaching about Destruction and that it will be a starting point for discussions between parents and children about morals, ethics and human values, not only today but also in the future. But this author’s text cannot, for the one who is interested, be anything other than just the beginning. 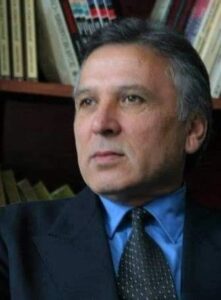